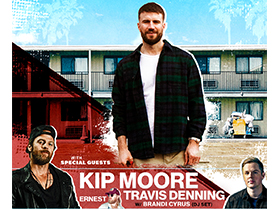 POSTPONED: In light of recent developments regarding COVID-19 in Michigan, we have decided to postpone Sam Hunt: The Southside Summer Tour.

We encourage ticket holders to keep their ticket(s) as these will remain valid for the rescheduled date; however, Soaring Eagle Casino & Resort will honor refund requests. Refund requests must be made no later than two weeks prior to the rescheduled performance. To obtain a refund, please visit or contact Eagles Landing or Soaring Eagle box offices during the hours of 9am - 11pm or contact ETIX. Refunds will be in the same form of payment made to purchase the tickets.

Since the launch of his career, Sam Hunt has quickly assumed recognition from both inside and outside the country music community for his boundary-breaking artistry, incorporating use of R&B and pop into the production and songwriting of his songs. He has been honored with numerous awards, including one American Music Award, and one CMT Music Award, as well as nominations for Billboard Music Awards and Grammy Awards. Southside is the upcoming second studio album by American singer Sam Hunt. It is scheduled to be released through MCA Nashville on April 3, 2020.

Kip Moore often lies awake in bed at night. Melodies and lyrics swirl through his head. Sometimes they’ll dissipate as seamlessly as they first arrived. Other times, the singer-songwriter can do nothing but begin singing them aloud. It frees his ever-churning mind. It allows him to continually discover his own voice. It grounds him. Most importantly, for a man prone to bouts of self-doubt, it reassures Moore that his path is a righteous one. “I have a complete sense of calm right now,” the singer-songwriter says. “During this whole journey, as down as I’ve gotten at times, I’ve done this thing my way. I don’t have any regrets. I’m always looking ahead.” The journey Moore speaks to is a monumental one: from that of a struggling Nashville musician to a massive country superstar with his mammoth 2012 debut album Up All Night; and an artistic adventurer with 2015’s sonically bold and critically revered second effort, Wild Ones. Now Moore is set to release his most unflinching, distinct testimony yet: “I know how strong this record is. I know its capabilities,” Moore says of SLOWHEART, the country star’s evocative and profound third album due on September 8th. The culmination of an ever-evolving talent’s process of self-discovery, the LP is a warm and honest embrace of Moore’s rugged rock roots and a showcase for his innate poetic prowess.

A native of Warner Robins, Georgia, singer/songwriter Travis Denning just released his new single “After A Few,” which he co-wrote and follows his Top 40 debut single “David Ashley Parker From Powder Springs”. Denning, who has been spotlighted by Rolling Stone for his “everyman worldview that evokes his small-town, big-hearted upbringing and a sound that is a wide tent – fun, modern country with rock-guitar licks”, was recently selected as an Opry NextStage recipient and CMA KixStart Artist, as he makes his mark within the industry. Inspired at a young age, Denning developed a love for country, pop, rock and heavy metal and started playing local bars from the age of 16, as he built a strong following from his distinctive songs and raucous guitar solos. Denning moved to Nashville and secured outside cuts by Jason Aldean, Justin Moore, Michael Ray and Chase Rice. A prolific writer with an unquestionable stage presence, Denning caught the attention of Universal Music Group and signed a record deal in 2017. Denning has previously opened shows for Cole Swindell, Alan Jackson, LANCO and this summer is playing some of the country’s biggest festivals including CMA Fest, Faster Horses Festival, Watershed Festival, Country Thunder and more this summer. When Denning is not touring, he is in the studio working on his debut album.