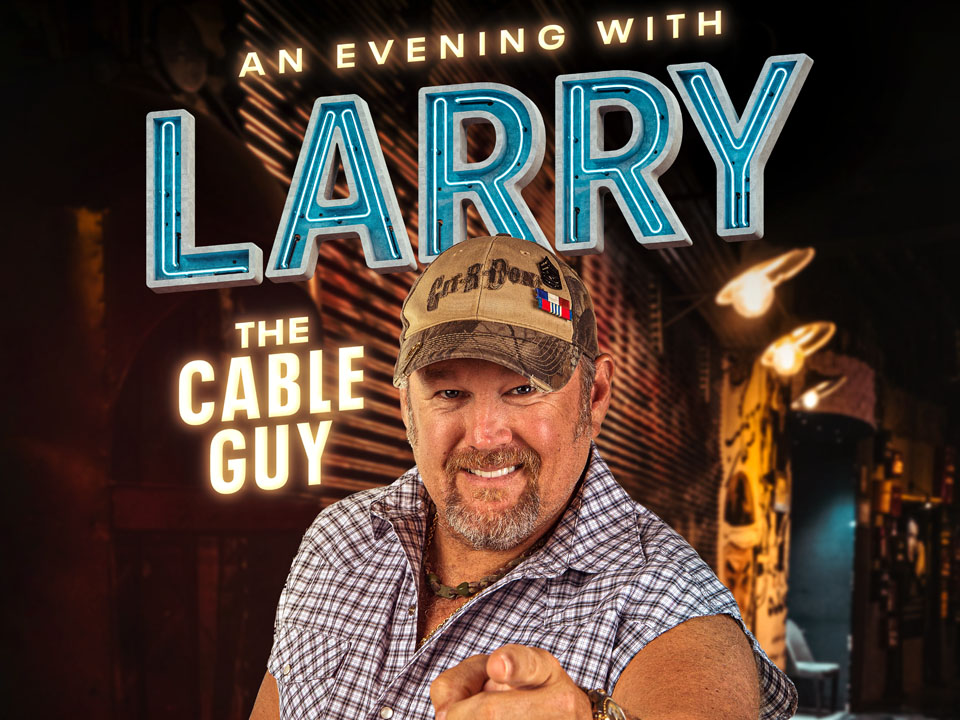 Larry the Cable Guy is a multi platinum recording artist, Grammy nominee, Billboard award winner and one of the top comedians in the country. He has his own line of merchandise and continues to sell out theaters and arenas across the United States. Larry has created The Git-R-Done Foundation, which was named after Larry’s signature catchphrase, and has donated more than 7 million dollars to various charities.

Larry is the voice of the beloved Mater in the Golden Globe winning animated feature film Cars (2006) and Cars 2 (2011) from Disney/Pixar. Both movies opened number one at the box office and combined have grossed more than 1 billion dollars worldwide. Larry has also starred in Tooth Fairy 2 (2012), Witless Protection (2008), Delta Farce (2007) and his first feature Larry the Cable Guy: Health Inspector (2006). When Health Inspector was released on DVD in August, 2006 it sold more than 1 million copies in the first week of release.

In early 2012 Them Idiots Whirled Tour starring Larry, Jeff Foxworthy and Bill Engvall aired on CMT. The show was released on DVD and CD by Warner Bros/Jack Records, debuting at number one on the Billboard Comedy Charts. On July 4, 2009 at Memorial Stadium in Lincoln, NE, Larry performed in front of more than 50,000 and taped his hour-long special Tailgate Party for Comedy Central. The show was a thank you to his fans and Nebraska for their longtime support of him. Tickets were sold for only $4.00 and the show sold out in one weekend. The special aired on January 31, 2010 and the DVD was released on February 2, 2010. The comedy CD of the same name debuted at number 1 on the Billboard Comedy Charts.

Larry has won Billboard’s 2005 Comedy Artist of the year and Comedy Album of the year and he received the Billboard Top Comedy Tour Award in 2006. He is a bestselling author and his book Git-R-Done, (2005) debuted at #26 on the New York Times bestseller list. Larry was named to Forbes Celebrity 100 list in 2006, 2007, 2011 and 2012. This lists the hottest and most successful people in the entertainment industry.

The Git-R-Done Foundation is a non-profit organization established in 2009 by Larry and his wife, Cara, as a focal point for the family’s philanthropy. Emphasizing on children’s and veteran’s causes, The Git-R-Done Foundation has donated to great organizations such as The Arnold Palmer Hospital, Operation Homefront and Madonna Rehabilitation Hospital.